Why clown cars are the 'new' scum bag class...

ThePigSheFlies, on Sep 04 2020 - 07:19, said: wargaming balances based on win rates.  the fact is that wheeled vehicles are underperforming for most of the player base.   when wargaming balances based on #feelz then we have dumb decisions like murozor putting in the pre-nerf 268v4...   I know this doesn't align with bad player narrative, but too bad.  For those muppets that insist that tracked LTs dont' have a chance vs wheeled, I offer the following exhibits.   1700 battles in the ELC Even 90 - all during the wheeled era, all but ~20 or so were solo.  over 60% solo win rate. ~450 battles in the LHMTV.  a "bad scout" by most everyone's agreement.  all during the EBR era.  I actually only got the thing to do Alliance missions including Alliance 15 for the 279e.  I kept it because it has some unique challenges and solo it at ~56% LT 432 - yeah, it's "over powered" - but how is that possible when clearly wheelies are more over powered?  430 battles solo at 58% LTTB.  I had played this sparingly, originally as a tier 7.  I bought it back early in 2020 to complete Union 15 for the 279e, with a fresh crew.  Played it quite a bit after getting it back and dragged the win rate UP from ~51% to ~57% this year alone, now at 57% My tier 9 LTs such as the Amx 1390, T54LTWT, Ru 251 have all been played semi-regularly in the world of wheelies and all continued to maintain their historical win rates over 56%.  The only one that dropped was the T49, running the Derp.     anyway, here's what a wargaming balancing curve looks like.  even above average players in the EBR 105 can't maintain their overall win rate in it.  they have bad DPM, and the majority of maps are too small for them to even be relevant in most battles.  for average players and below, it's a much worse story. 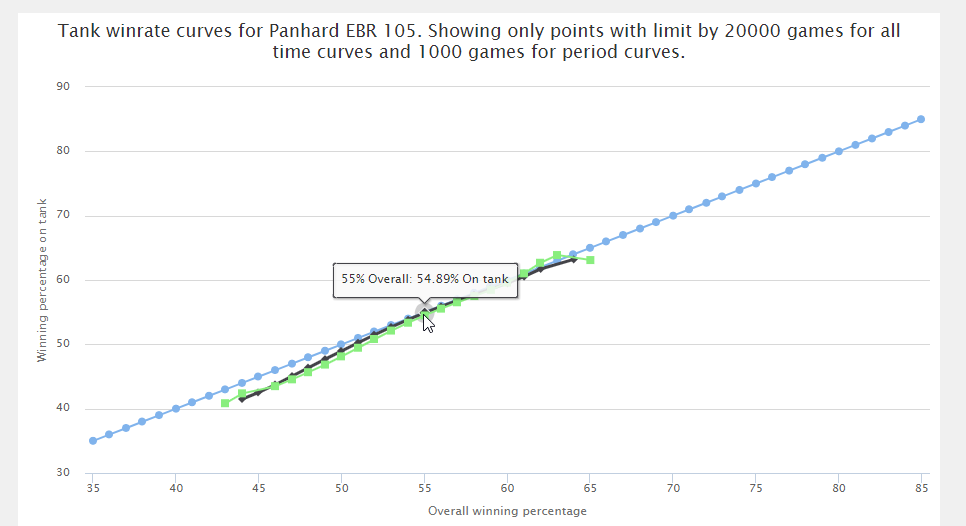 The only wheeled cart that is currently over performing is the premium, which underperforms for average and below average players, but is very strong still for above average and good players.  (e.g.  for most of the player base it's still relatively balanced) 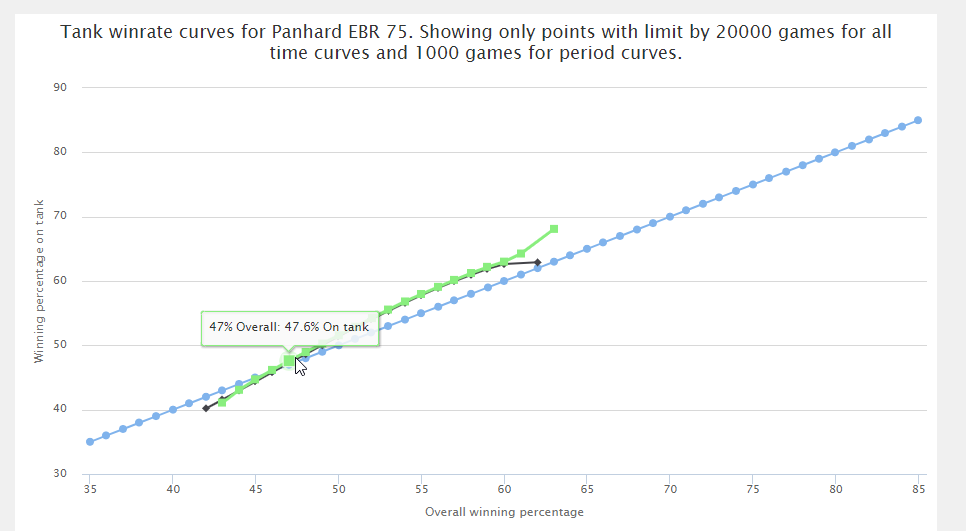 are they broken to a degree and annoying?  no dispute.  but my experience is that the majority of times they die off really early in a battle and/or are most often easily played around.  even in "bad LTs". whereas arty is broken, and annoying for the entire battle - unless a yolo wheelie gets through and kills them...   for those of you that whinge that it's impossible to scout in anything other than a wheeled vehicle, I submit that the problem lies between your chair and keyboard.

KRZYBooP: Lemme start playing the EBR so I bring that curve back down