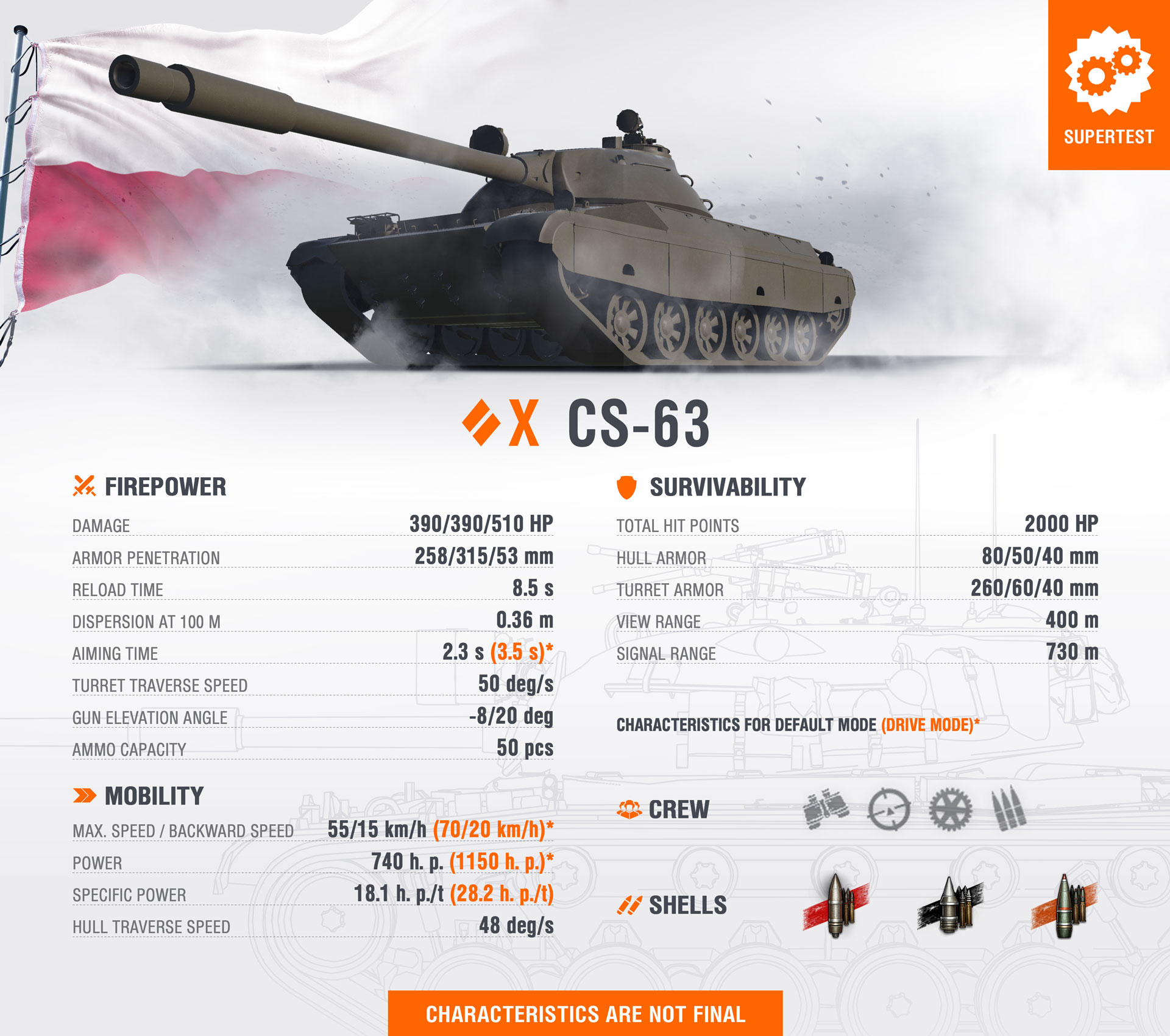 Today, a representative of the new Polish branch, the CS-63, will try to make it through the closed Supertest. This Tier X medium has some quite promising characteristics! Let’s take a look.It’s armed with a 105 mm gun delivering alpha damage of 390 points. A standard AP round can penetrate 258 mm of enemy armor, while a special APCR can go through 315 mm of it. In 8.5 seconds, the gun is reloaded enabling you to cause even more damage. As for other parameters, the dispersion and the aiming time are 0.36 at 100 m and 2.3 seconds, respectively. Also, the gun sports decent stabilization values and the vehicle has a view range of 400 m.Armor-wise, it’s quite an ordinary vehicle: its front armor plates are 260 mm thick, but mainly in the gun mask, while other areas have less protection. The hull’s protection is even weaker: 80 mm in the front, however, the armor plates are well-angled. Overall, the Pole’s hit points amount to 2000.The best thing about CS-63 is its mobility. The tank can move in two modes: standard and rapid. Switching between them spurs dramatic changes in the vehicle’s dynamic characteristics. In standard mode, the maximum speed is 55 km/h, while when putting in rapid mode, the Pole can hit 70 km/h. Also, with the rapid mode on, its engine reveals a whopping increase in power: from the standard 740 hp up to 1150 hp. While the dynamics increase in rapid mode, the performance of the gun suffers (the stabilization and the aiming time values decrease significantly) and the vehicle becomes more visible.It should be noted that the impact produced by switching between modes is far from set in stone, and both the numerical values ​​and the characteristics might change.Summing up, the CS-63 is a classic medium tank. It has a decent gun, mounted on a flexible, yet poorly armored platform. However, putting the Pole in rapid mode allows for a much wider area of control over the map and expands the range of tactical options. In skillful hands, this vehicle can perform to the utmost of its abilities.
[ S T ] Polish Medium Tank CS-63
Реклама | Adv
WoT-News.Com