Дата: 10.09.2018 15:49:16
Gnomon: Hey, everyone! Hope that you’re having a great Monday so far! I have a bit of Supertest news that I wanted to share with you and gather your feedback over.  Today, we’re starting the Supertest of a Soviet heavy that hasn’t been in the spotlight for a quite a long time: the IS-3A, a Premium tank with an autoloader. The autoloader has been replaced with an autoreloader in this Supertest version. The objective of the test is to assess how the mechanic introduced with Italian medium tanks would work on a heavy tank. Please note: we’re checking the general autoreloading mechanic and not this particular tank. Also, this Supertest version of the IS-3A is the first iteration: we may adjust the mechanic and/or change the stats later. The IS-3A was chosen due to its aggressive brawling playstyle with the ability to conserve firepower. We’ll see what happens!  What are we testing exactly?In this Supertest, the IS-3A with an autoreloader gets a three-round clip, much like the one the top-tier Italians have. But there is a major difference, it’s the first round that takes the least time to reload, not the third one. 12/15/18 seconds are the reloading times for the first, the second, and the third shells respectively (at this first stage of testing). You’re able to fire once the first round is loaded, but in this case, the loading sequence will start anew so you may want to wait for another shell. Or, probably for one more.In short: when you’re empty, each successive round takes more time to load. 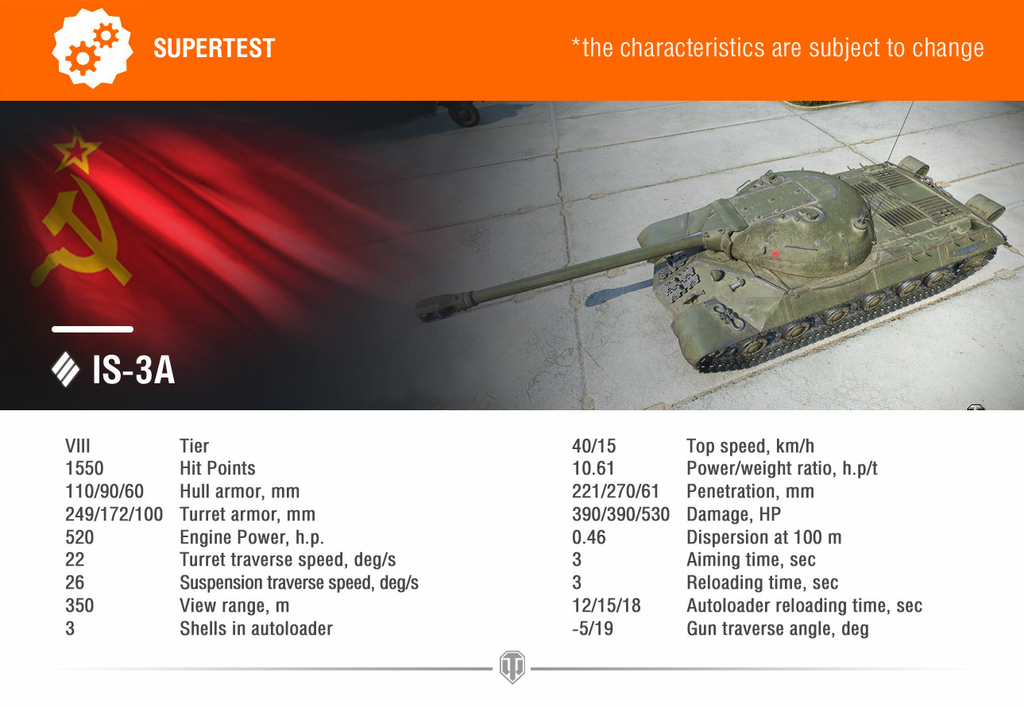 What do we want after all?We want a heavy tank that favors a distinct attacking playstyle. A vehicle conserving firepower when the battle slows down or while changing its position, and then dishing out around 1,000 damage while staying in combat (this tank should be able to wage war with one shell loaded if needed— as the reload time for the first round is short). The gun parameters will still stick to the role of a brawler as the gun’s low accuracy precludes sniping. Still, close combat should be more enjoyable compared to the classic version because the aiming time was reduced to 3.0 seconds (from the previous 3.4 seconds). All-out attacking and a series of hard-hitting punches FTW! What will happen to the IS-3A in the future? It is being discussed as we’re testing the gameplay concept of an autoreloader heavy and not the changes made to the IS-3A. A lot will be defined by test results, like whether this concept sees release or not. Either way, we’ll make sure to inform you of any changes to the IS-3A beforehand, if they happen.  Once again, the stats and the inverse autoreloader concept for the tank aren’t final and are subject to change, depending on testing data and your feedback. Stay tuned, and best of luck on the battlefield!
[ST] IS-3A Inverse Autoreloader
Реклама | Adv
WoT-News.Com