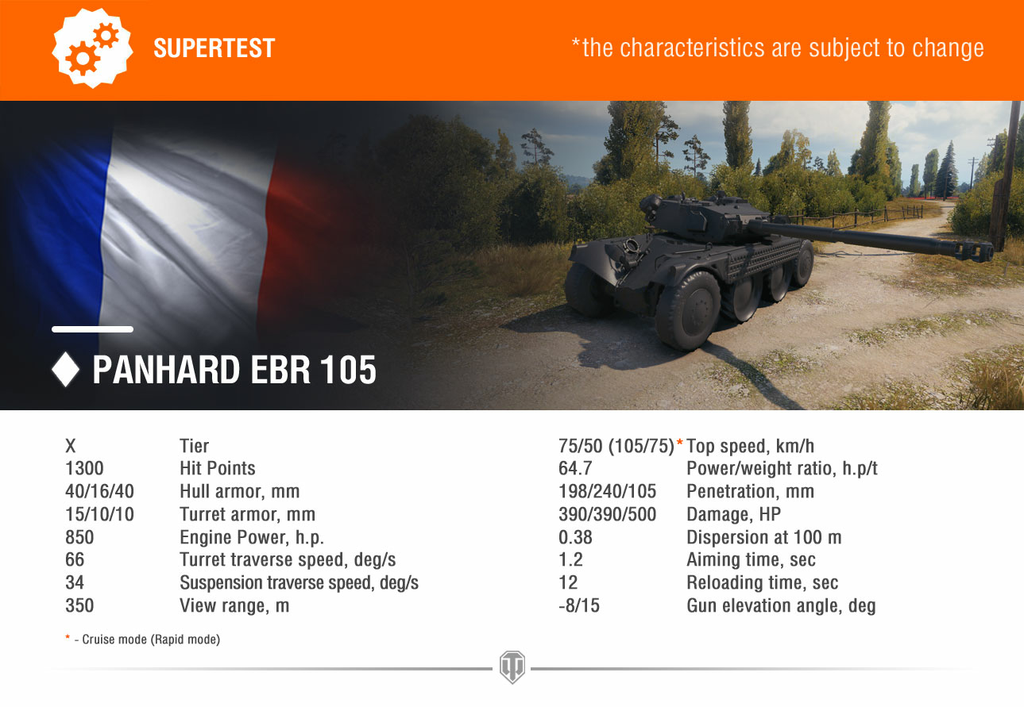 Closed testing of the French Wheeled vehicles branch has started on the Supertest server. This is the first Tech-Tree version of a wheeled vehicle to be tested in World of Tanks. We will be fine-tuning the line starting at the top with the Panhard EBR 105, which most prominently showcases the unique features of the line. The vehicle has 8 wheel with 2 driving modes, 'Magnet' lock-on, the charging mechanic, with other distinct features in place.
It's extremely vulnerable to enemy fire, with a small HP Pool and virtually non-existent armor; this means players will need to rely on its mobility and small size to survive. While it is classified as a Light Tank, the vehicle features a characteristic that is likely to be unique to Wheeled vehicles: View Range is substantially lower than non-wheeled LT's, designating these vehicles to more of an active spotting role. The vehicle's Firepower is enough to finish off damaged enemies at the end of battle, but not enough to reliably trade shots with anything tier-for-tier, or arguably even below tier. The ace up this tank's sleeve is its mobility, to be sure, coupled with the 105mm gun's outstanding stability on the move. To emphasize the point that dealing damage is not an armored car's specialty, its reload speed is quite slow. The general conclusion here is that the Panhard EBR 105 has all the strengths and weaknesses of wheeled vehicles combined together and prominently featured in a single package, and provides an excellent starting point for fine-tuning the rest of the line.  So how's its playstyle?Wheeled vehicles are likely to provide a more exciting early-game than classic scouting tactics in a traditional LT.
At the start, you play as an extremely mobile and active spotter. Aggressive flanking maneuvers and early spots will be a likely occurrence if you see these on the enemy roster.Midgame, you take up the role of an agile reconnaissance vehicle with limited firepower. Without the firepower to burn down targets 1-on-1, even in the midgame it's important to prioritize survival and continue providing your teammates with valuable spotting assistance and pull into the lategame, where the enemy ranks should be thinned down enough to allow you the role of a rapid and dangerous predator. The Panhard will be relatively tough to handle, so experienced and confident tankers will feel right at home in these vehicles where a classic LT might be more friendly for novice players.
Please feel free to share your impressions below and stay tuned for more announcements about wheeled vehicles as we continue development.
[ST] Panhard EBR 105
Реклама | Adv
WoT-News.Com