Дата: 24.04.2018 01:37:20
AirG_Guerrillas  With the new changes to Fjords, the map has gotten better in regards to overall balance and tank role placements. Tank Roles: Anything with decent mobility (mediums, heaviums, lights, TDs) will generally want to either focus on center map engagements, kiddy-pool control/map vision for artillery support, and north brawling/fall-back defensives. Stuck in a super structured heavy or TD? feel free to continue to the South J-hook and brawl it out, or stall it out if you're confident in your team's comp.(composition) to take and control the North side. Since this position is completely isolated from the rest of the map, teamwork and sharing Hit-points is CRUCIAL in winning this flank.  General Strategy/successful snowball wins: The map plays out with 3 general flanks in mind, The North(waterfall), Middle/kiddy-pool, and the J-hook (as I like to call them), and creating successful crossfires through different angles using the middle of the map. The Middle is a key position and is always going to have allies waiting for either North Waterfall or South J-hook to win so they can shoot the butt of tanks positioned at Middle, thus creating a crossfire!  Find yourself in a flank that's losing? retreat! fall-back! it's always smarter to keep your gun alive, and alert your teammates positioned in middle to get ready to defend against a push.  Hope this helps! And as always, GLHF tankers! o7o7

DomoSapien:  I couldn't have said it better myself. Map control is vital to success on Fjords, with the most substantial changes having been made to the map in the North Field and central tower area by the kiddie pool. There are plenty of avenues to fire through from most positions on Fjords, however minimap awareness and avoiding tunnel-vision are must-haves if you want to avoid wasting hitpoints on inefficient trades.
General Visual Guide
(Shoutout again to Strat Sketch for the awesome visual guide tool!) 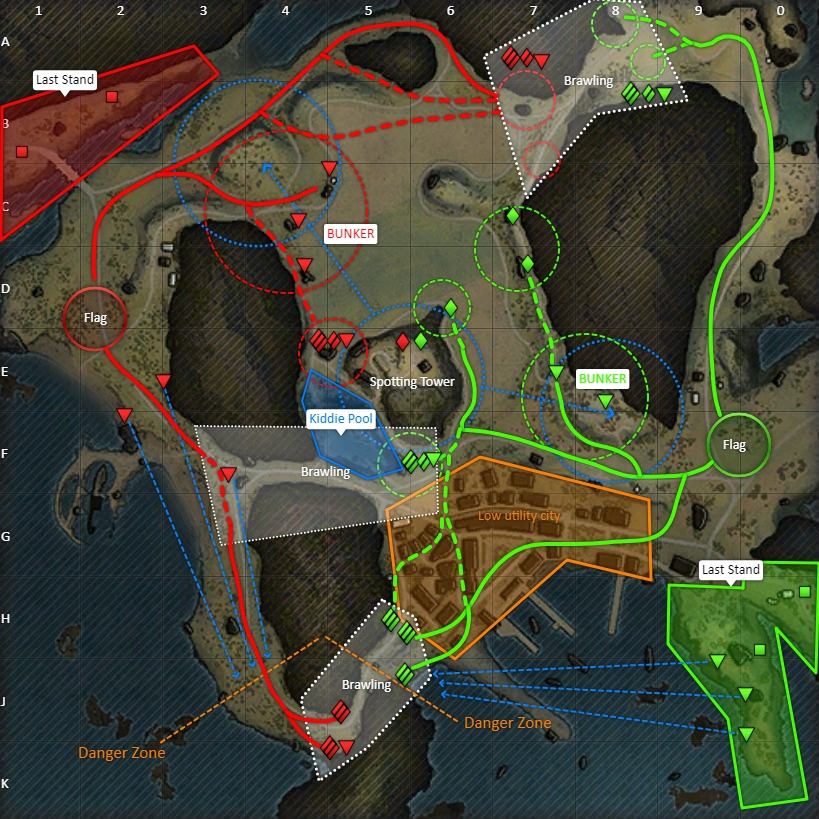 Map Key/Legend: Danger Zone: Once you push past this line you are exposed to enemy TD fire from spawn
Kiddie Pool: The small pond in the center of the mapBlue or White Dotted Circle: Spotting/Visibility area
White Dotted Box: Brawling areaLast Stand: Fall back here to survive longer if your base capture is inevitableBunker: Easily Defensible area
Solid Red/Green Line: Safe routeDashed Red/Green line: Dangerous route (Possible to take enemy fire)  The Field
This side has undergone the most drastic changes in the redesign. The middle has been flattened quite a bit, with a big sprawling expanse covering the majority of the middle. Several areas of trees and rocks in the middle have been removed, and the entire middle area now stretches splitting two areas of heavy foliage cover. What was previously a mess of firing lanes has been separated into two distinct "bunker" areas on the Northwest and Southeast end of the field, respectively. Offering some opportunities for high-risk-high-reward spotting up the road on the east side of the field, the team spawning in the Southeast has the advantage of field visibility, whereas the Northwest has the advantage of additional supporting fire up the Northeast corridor (or the Northeast Slugfest, as I like to call it.)Expand Firing Lanes & Spotting Checks: 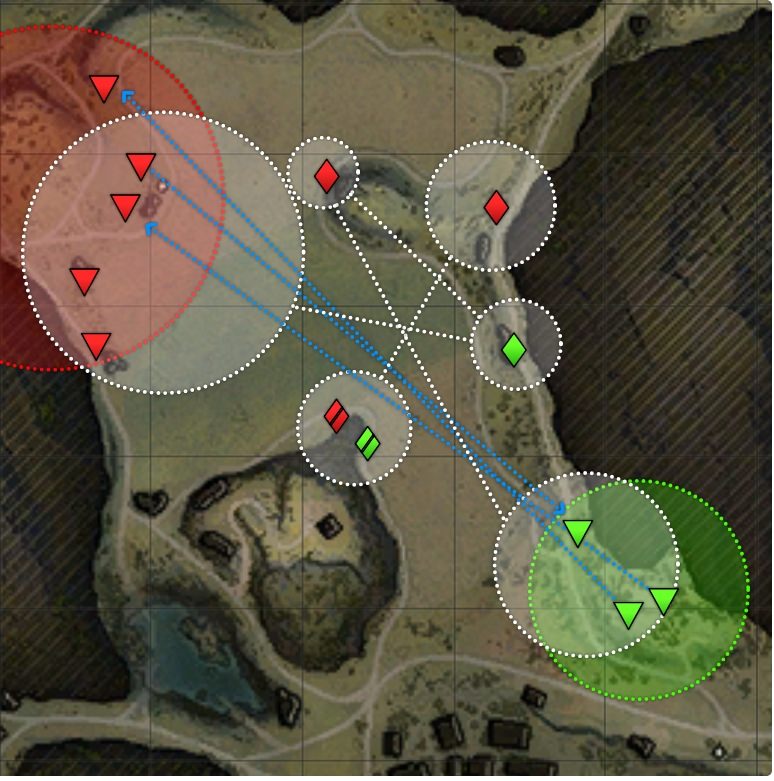 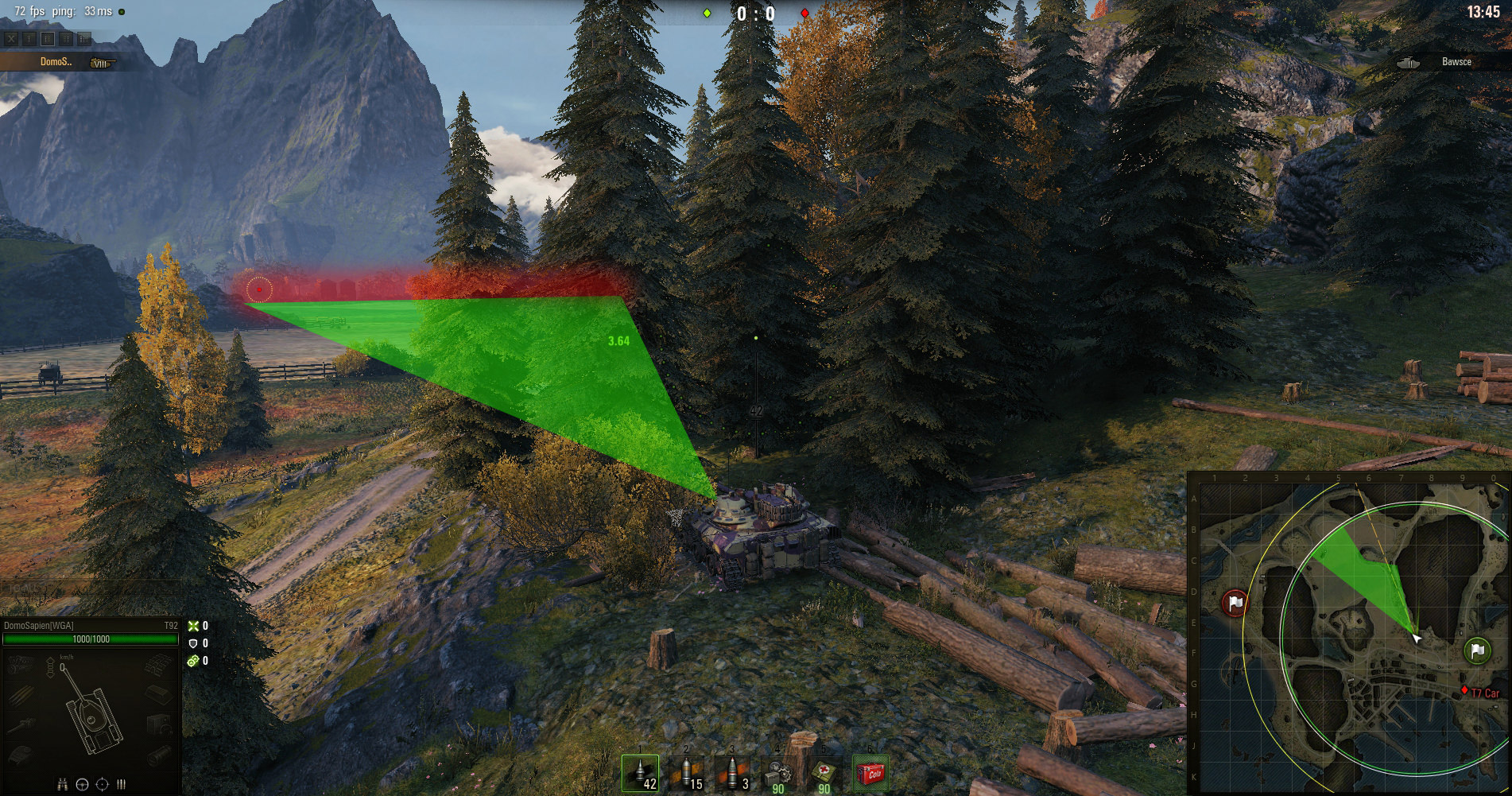 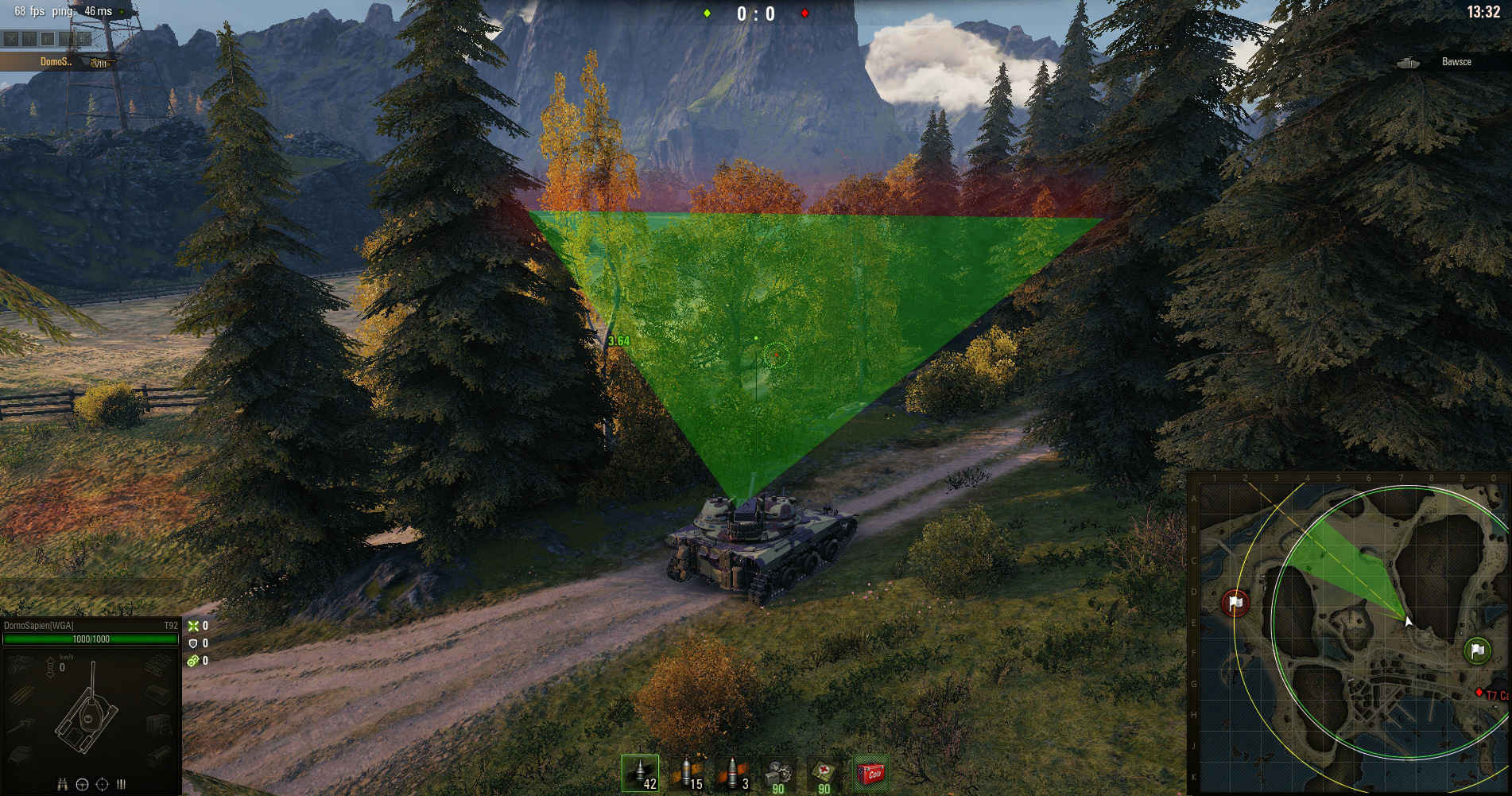 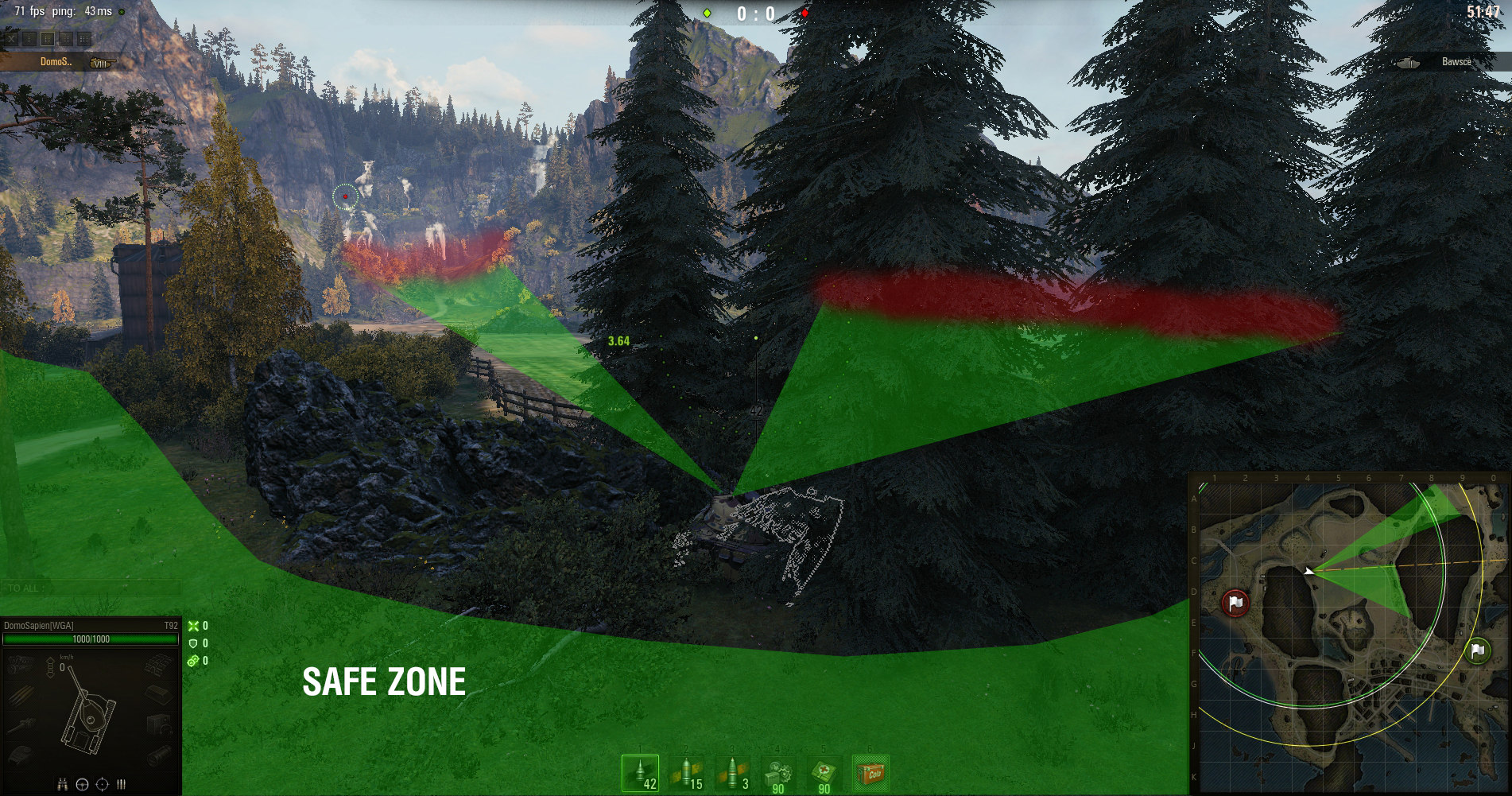 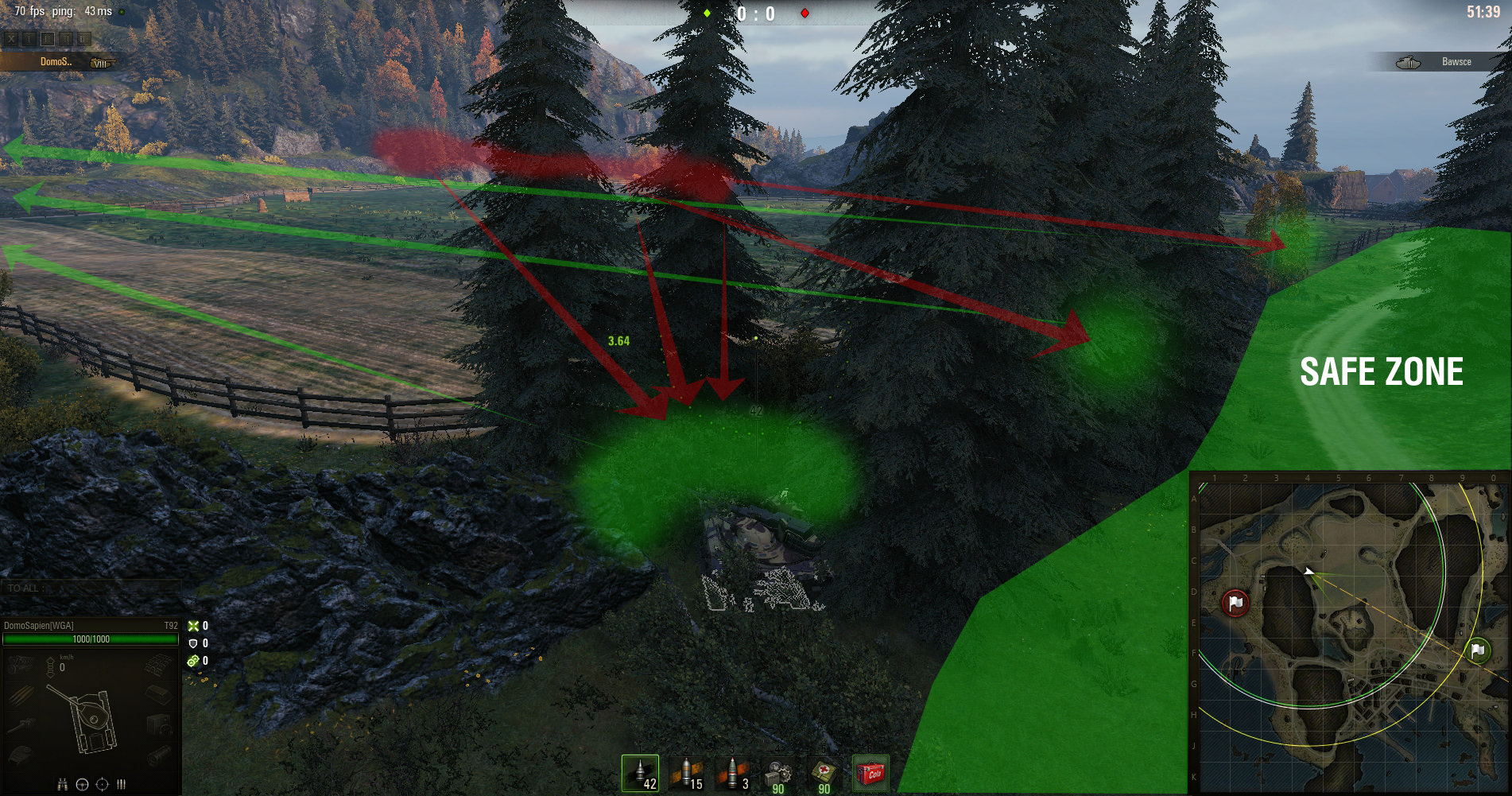 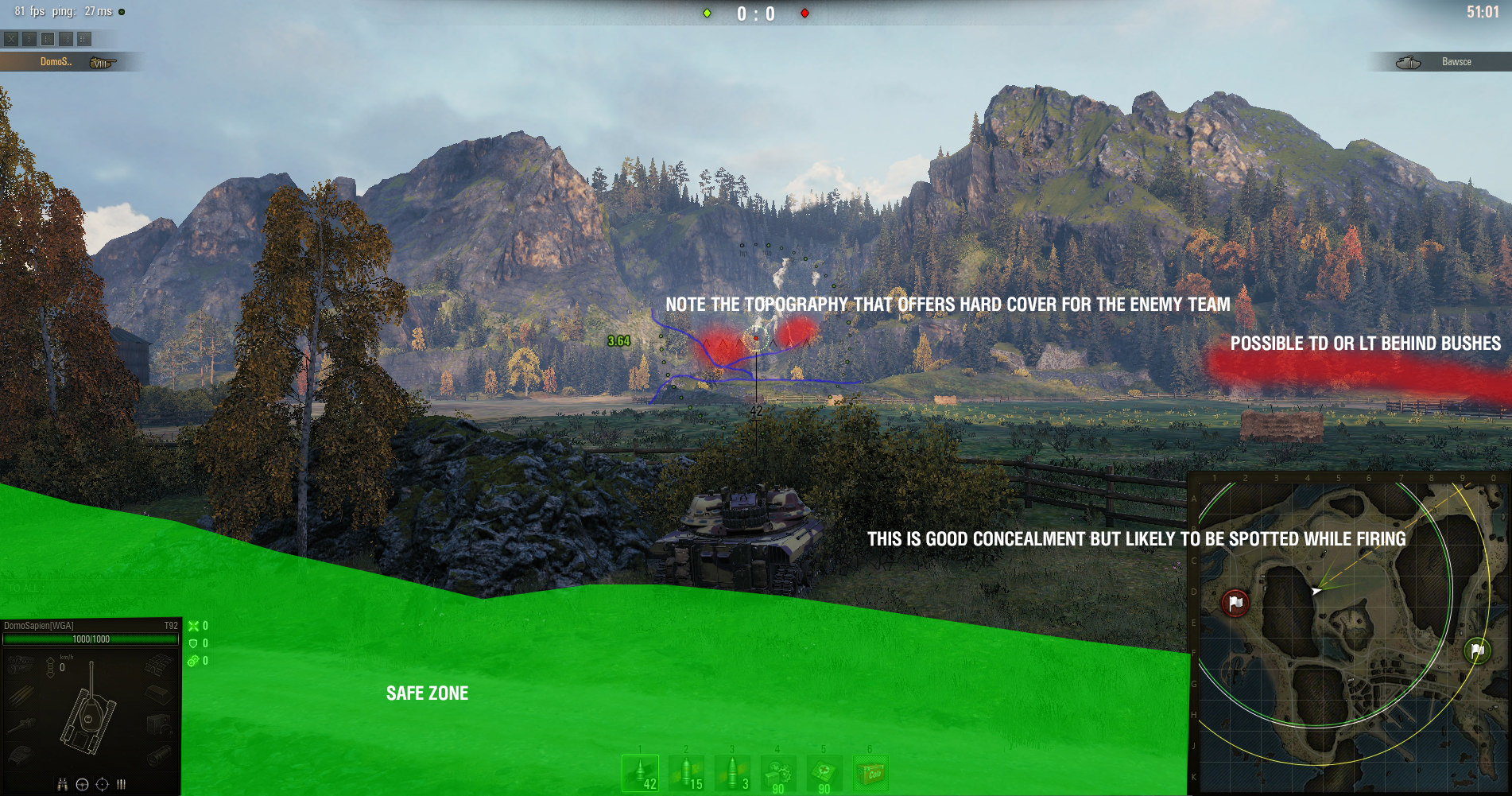 The Northeast SlugfestI call it a "slugfest" because this is the flank where you, well, slug it out. It's a hard-won flank, since there are so many places for each team to fall back and receive covering fire (moreso the Northwest spawn, but to a degree the Southeast as well). This flank should last a while, but when it falls it falls quickly. The Northwest team bottlenecks along the ridgeline in the Northeast side, since it's protected from the Southeast field by hard cover, spotting targets for supporting fire from TD's along the field and near the kiddie pool. The Southeast team loops around the hill in the north, and groups up around either side of the bottleneck to utilize hard cover for hulldown tactics.ExpandNorthwest Spawn
Most pushes along the Northeast side will end up around this location, since the other side of this valley doesn't have any hard cover to offer, unlike the hulldown spot on this ridgeline. It's way easier to fall back on the left side of the valley, as opposed to the right side. 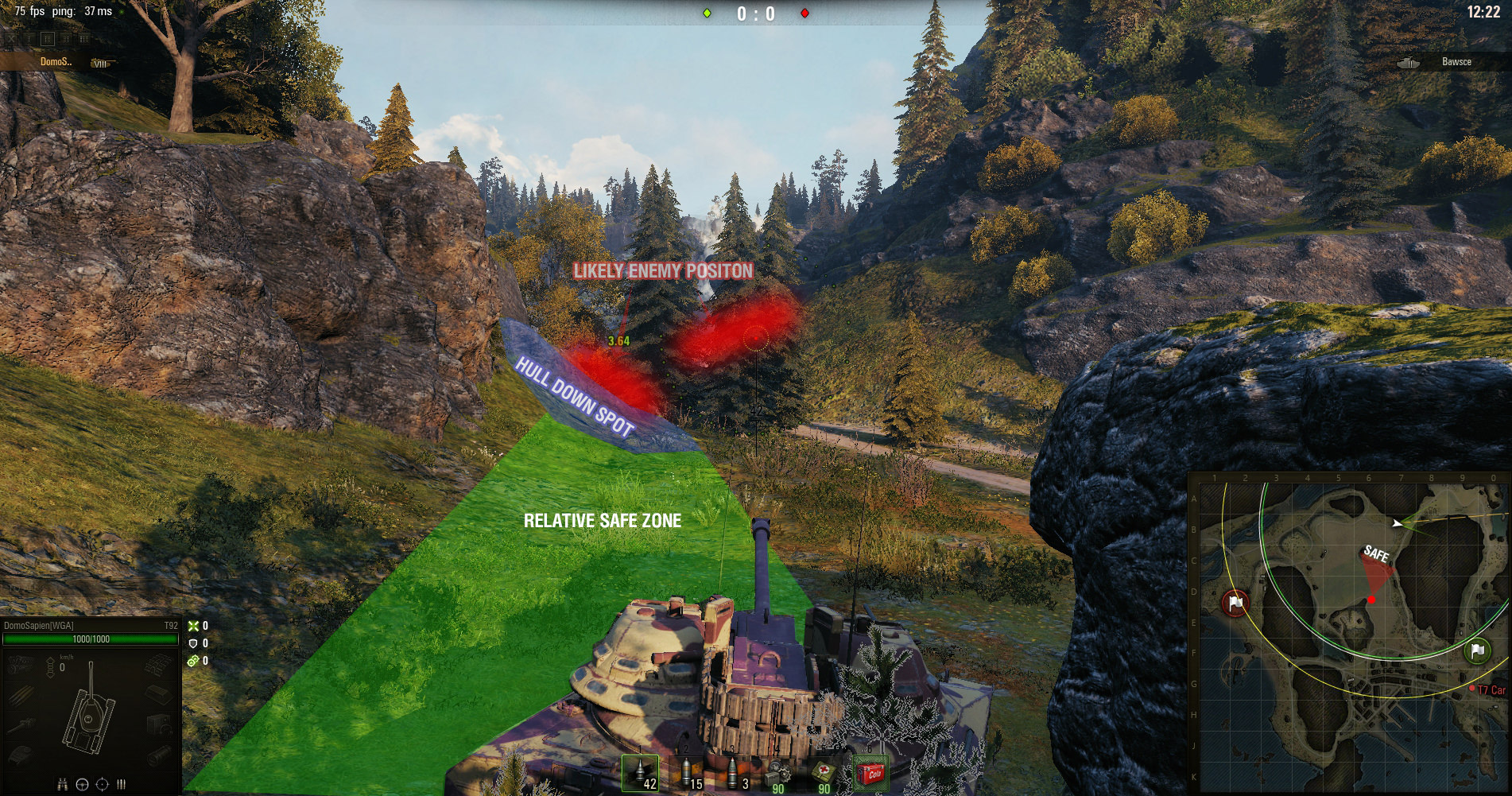 Northeast spawnWhile the waterfall sure is pretty, ignore it. You won't have anything to shoot at until this flank falls, if you sit by the waterfall instead of pushing up. You've got two primary options for holding the frontlines here:
Option 1 (Better for vehicles with good gun depression): 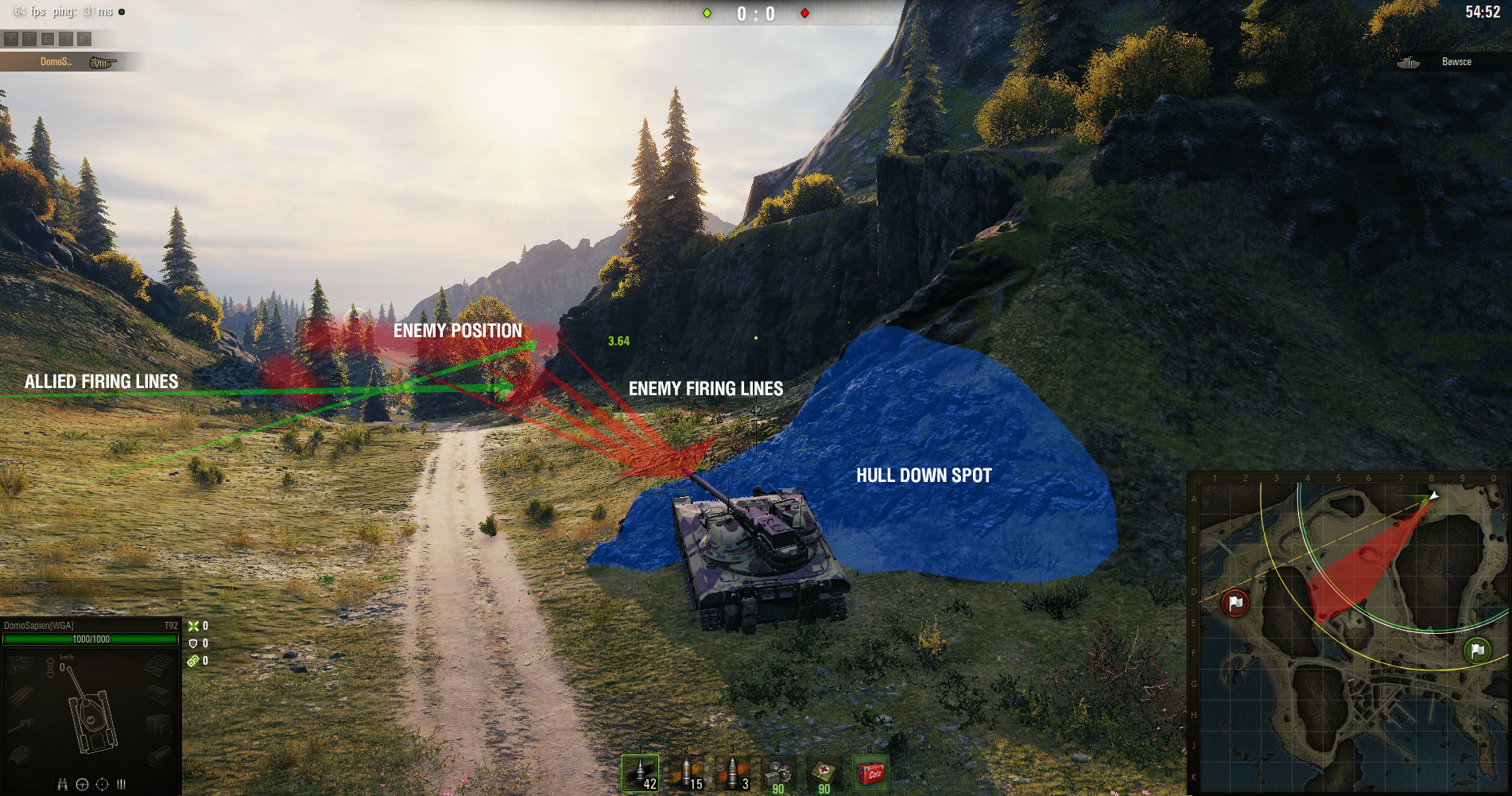 See that rock up there on the left? Sure looks tempting, doesn't it? Don't fall for it, it's not big enough to fully conceal even the smallest vehicles, likely exposing yourself to at least one firing line no matter how you orient yourself behind it. 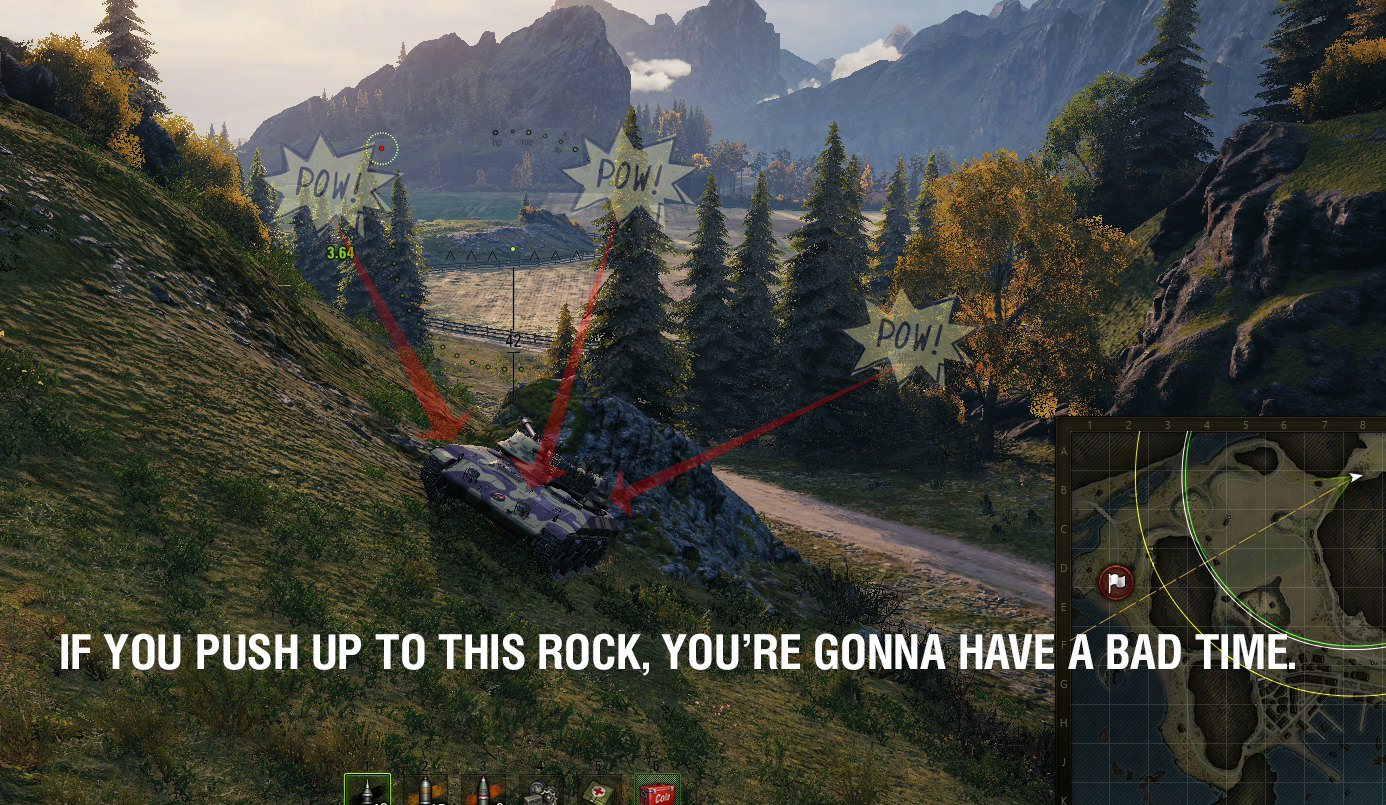 "The Kiddie Pool"/ Middle AreaI should start by mentioning something important which isn't visually represented here: The spotting tower. With the redesign it's possible for both sides to access the spotting tower (The elevated chunk of land around E5 and E6) and potentially light up TD's lurking in the bunkers with heavy foliage cover. However approaching the spotting tower is a risky play as slower vehicles will get torn to shreds before they make it all the way up.
The Kiddie Pool area offers the Southeast team a firing line across the Heavy Push going South on the West side, and offers the Northwest team a firing line across the Heavy Push going down the eastern road to the J-hook on the cape in the South side. This is an important flank to hold, as ignoring this area will allow the enemy team to take an aggressive flanking position from which your team will almost never recover.ExpandFiring lanes: 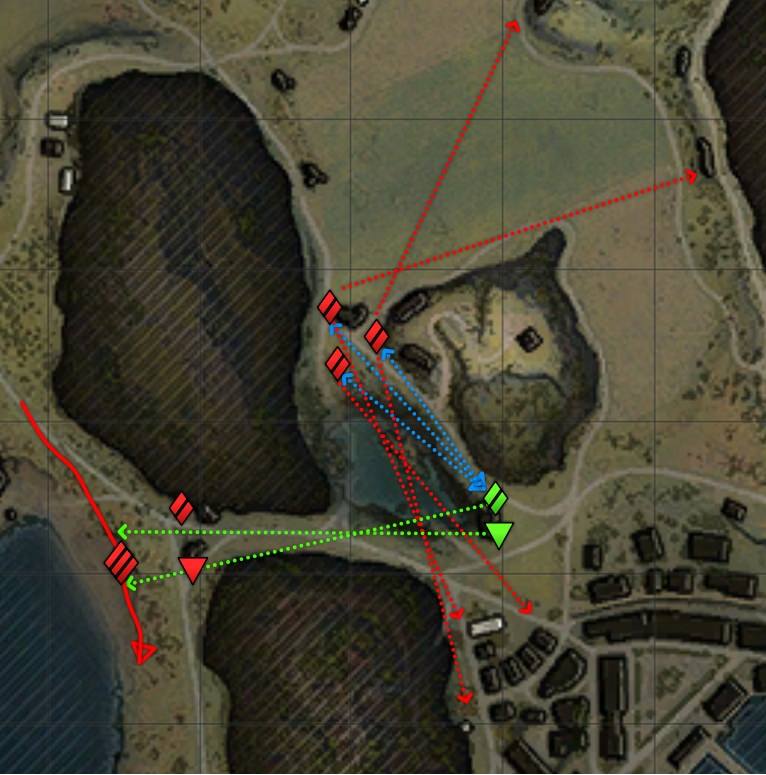 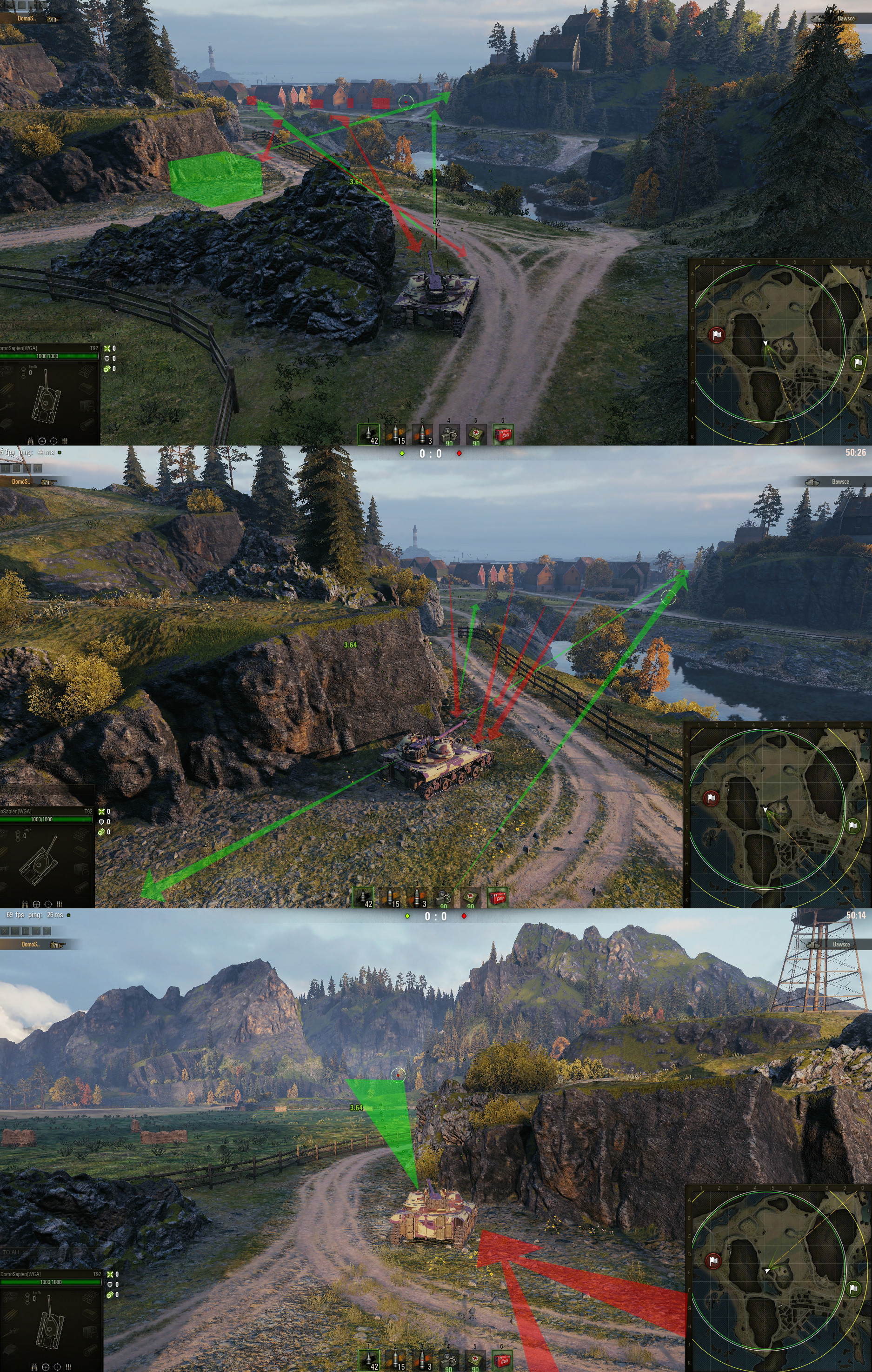 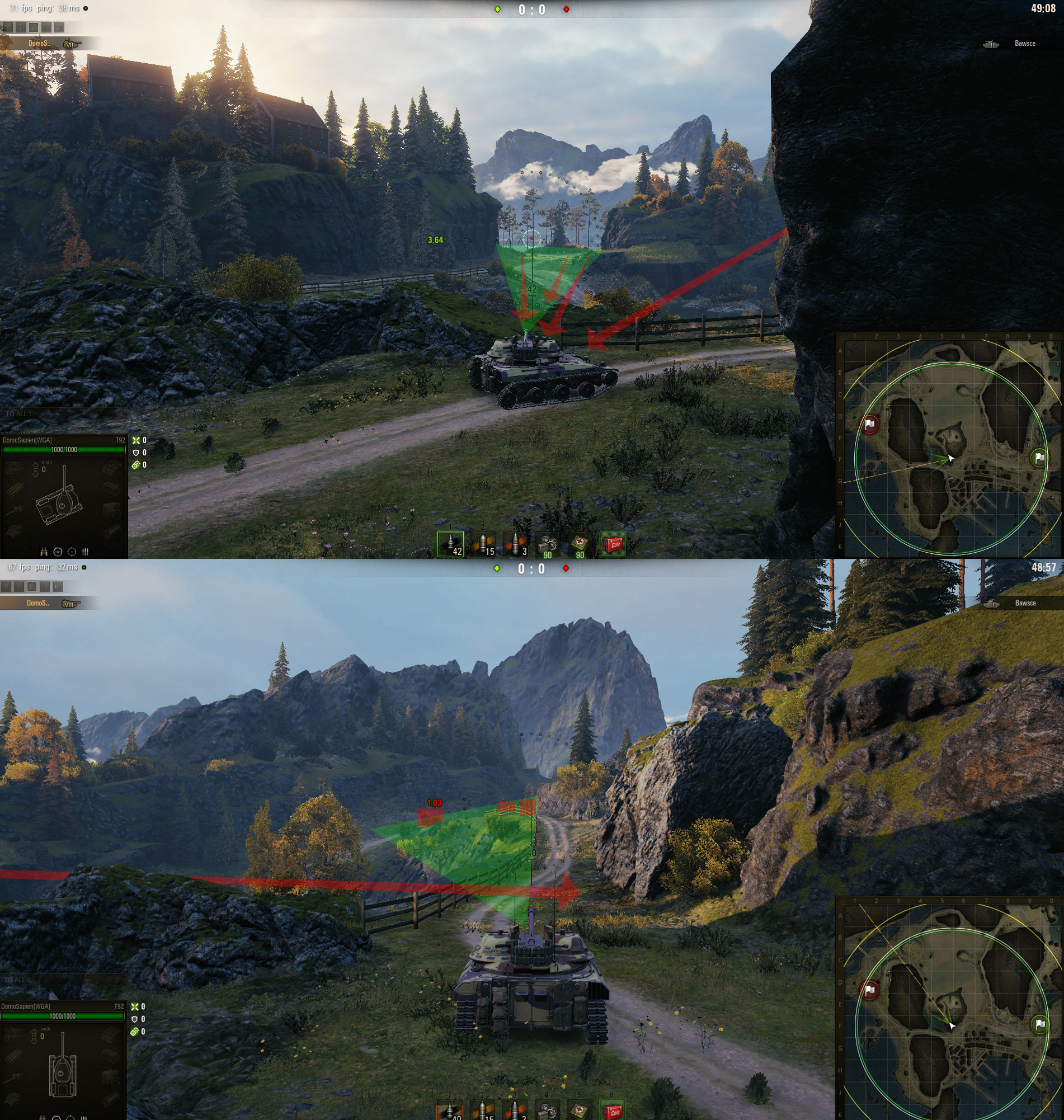 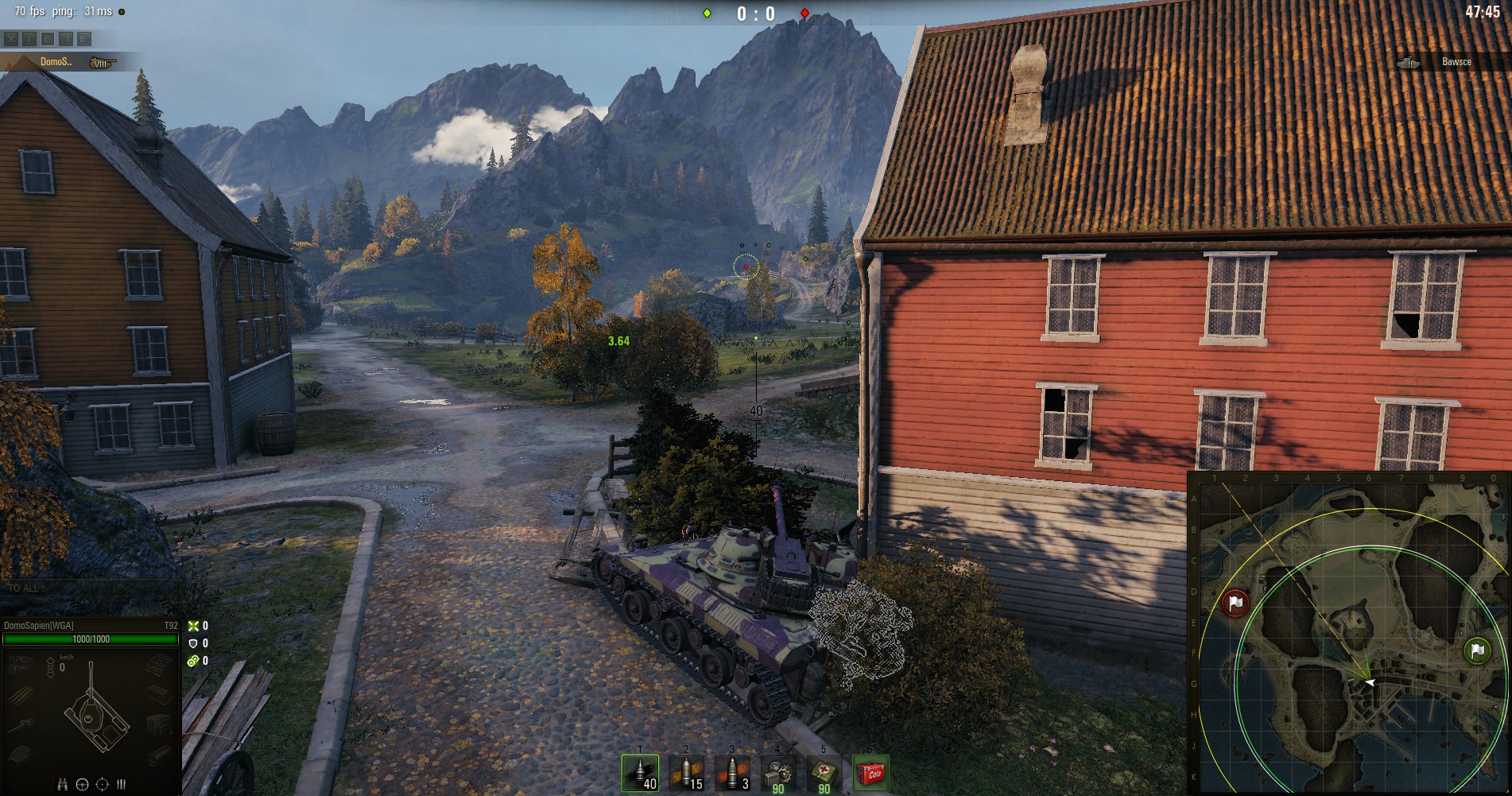 The South/ The "J-Hook"/ The Cape/ The Peninsula
This part of the map stays relatively unchanged, with the exception of a couple features: The team that approaches from the Northwest spawn has a little bit more of a flat incline on which they can hull-down on the Southern bank. There is an extra rock along the southern edge of the ridge that lines the road, blocking some of the initial visibility along the southeast bank for the defending side. This means that you will not be able to hull-down as reliably as on the hold version if you're taking this location, so you will need to either push up and expose yourself to enemy fire or wait for the enemy team to push past the rock so your TD's at spawn can dish out some serious damage.Expand Firing Lanes: 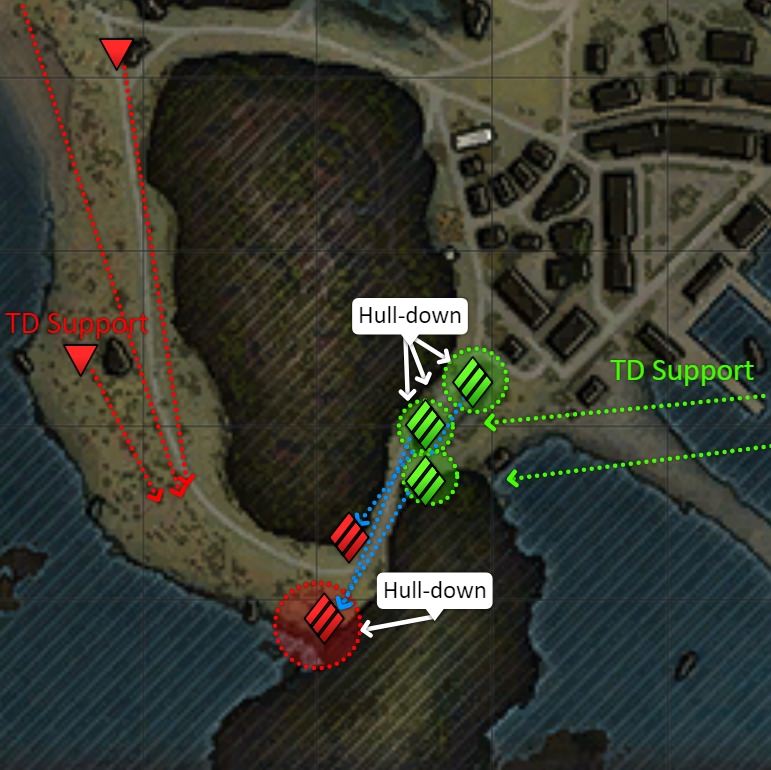 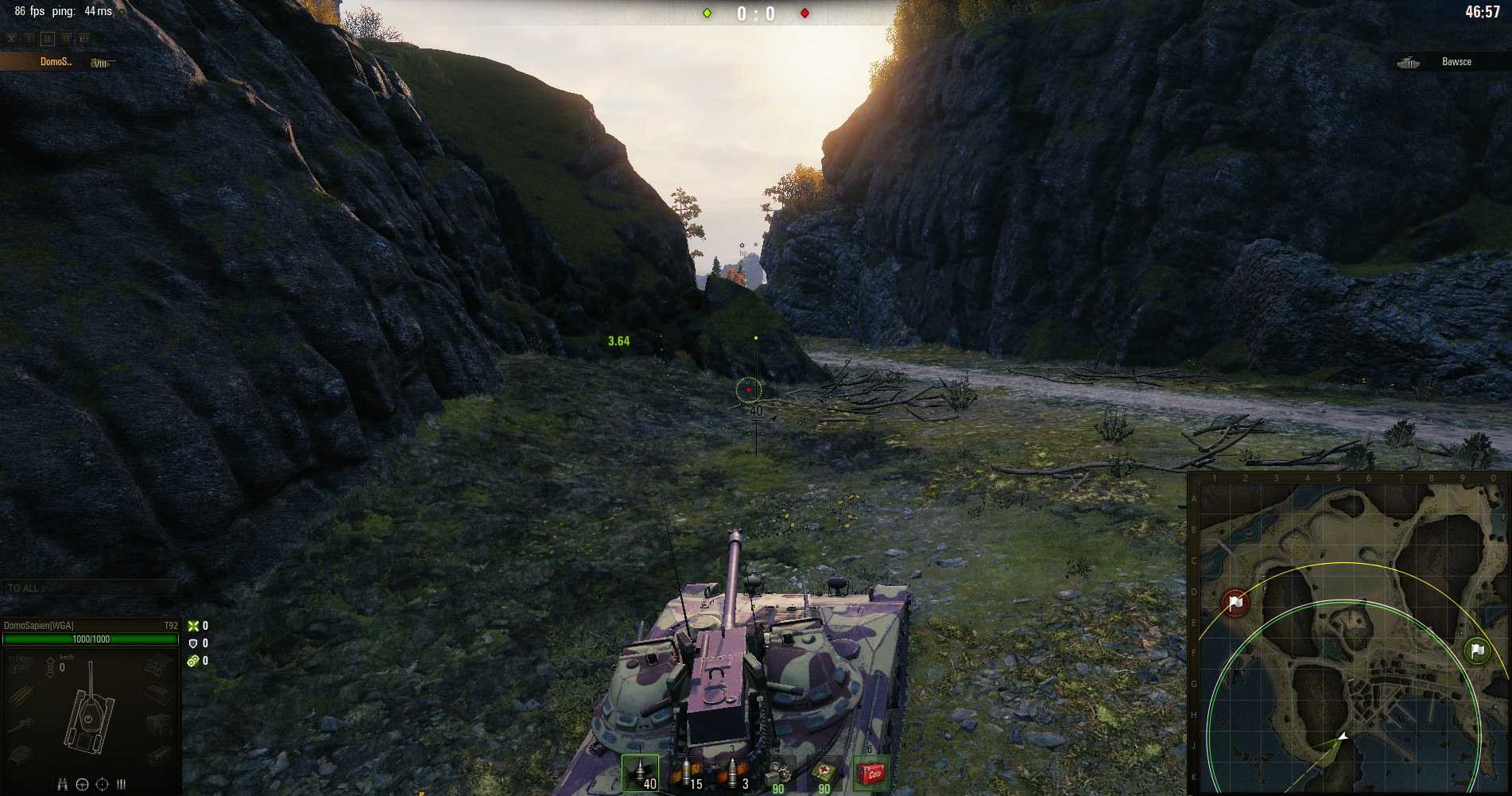 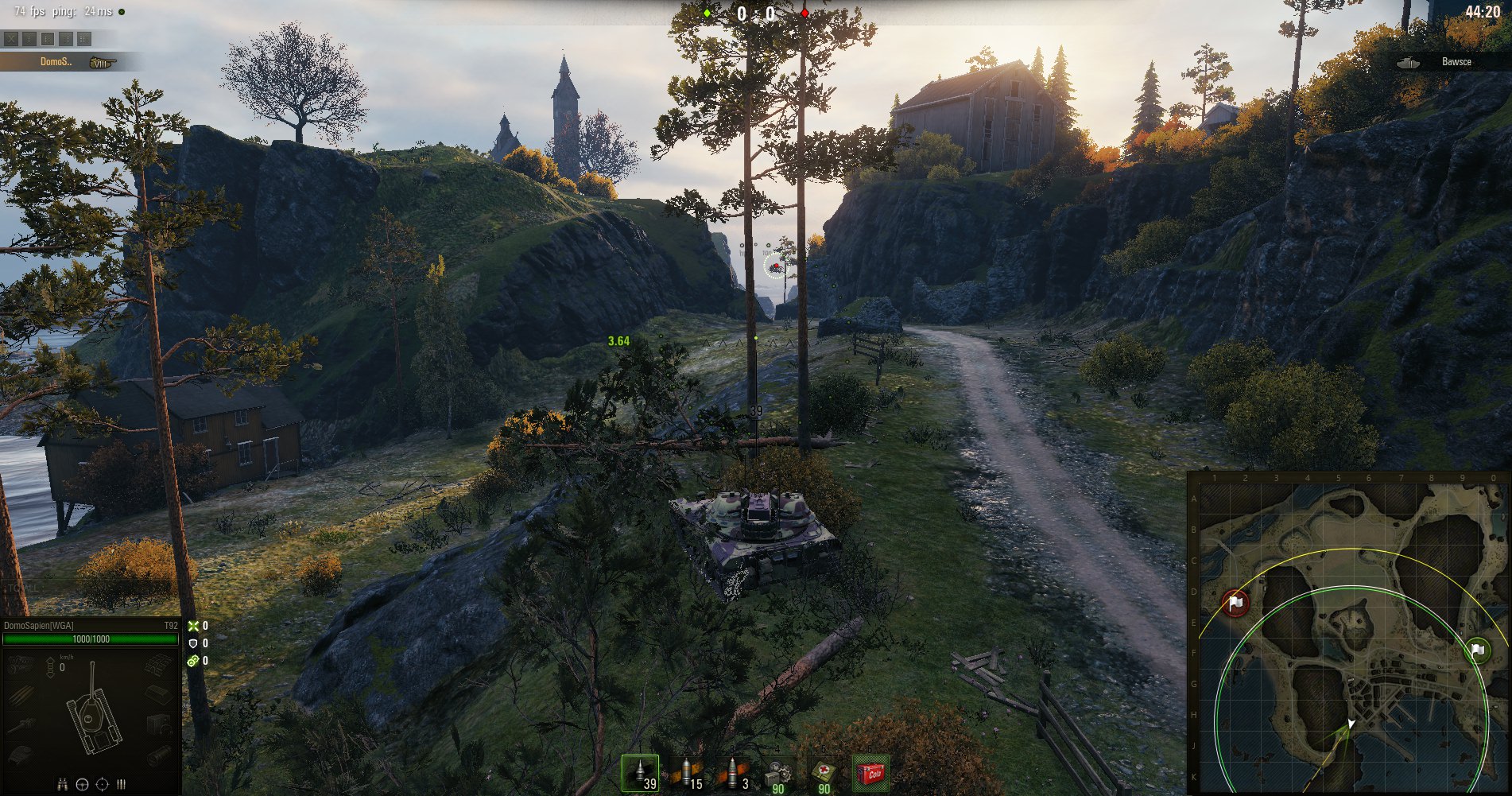 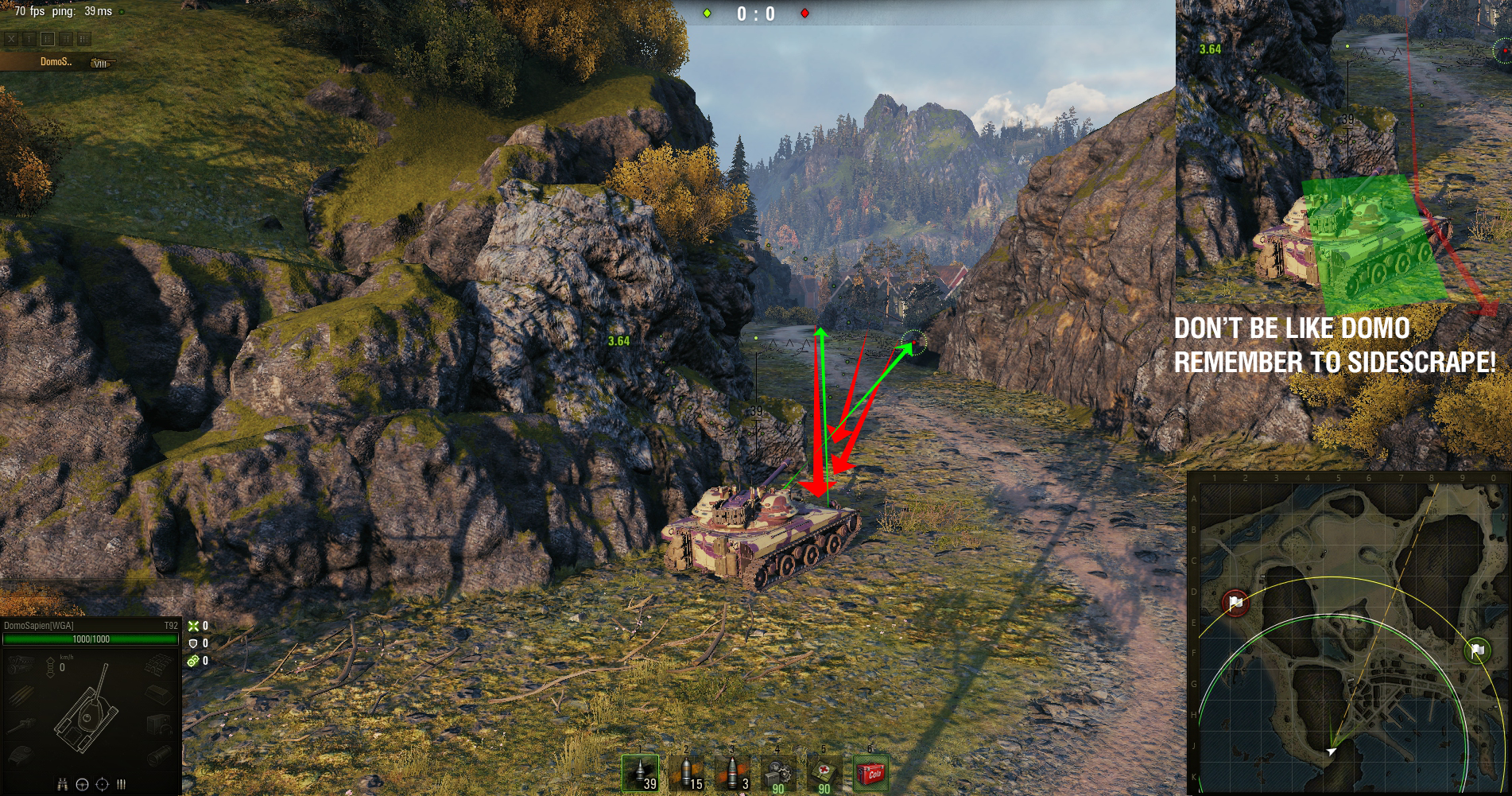 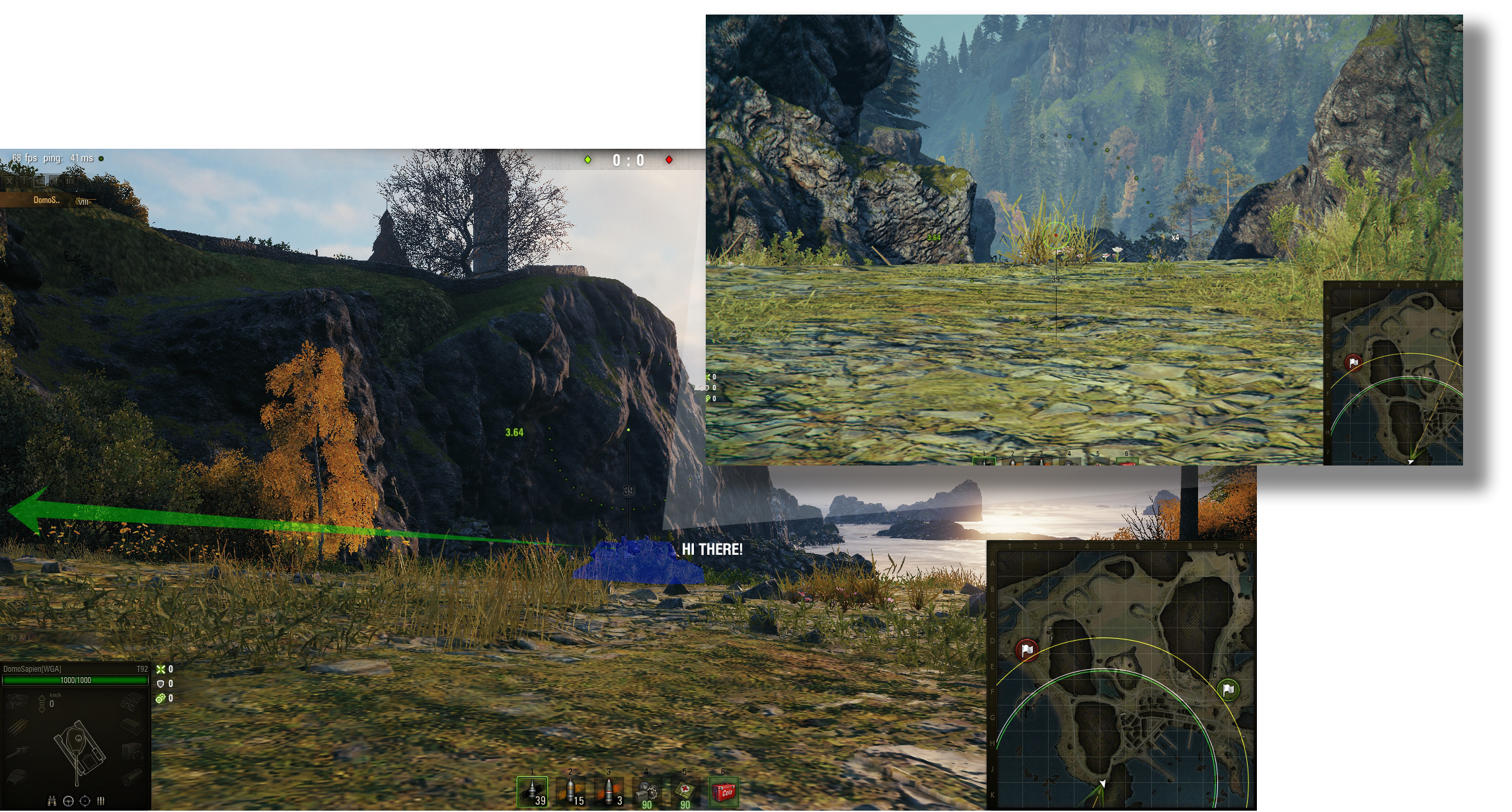 And that about covers it, more or less! What do y'all think? Any spots I missed? What areas of the map do you prefer, depending where you spawn? Any vehicles in particular that tend to shine on certain areas of Fjords? Share your thoughts below!
Map Mondays: Fjords
Реклама | Adv
WoT-News.Com