MStinos, on 16 May 2011 - 09:49 PM, said: Overlord, as you stated a few times before, the T34 wil remain as it is till new tech tree, because stats say it does fine.
Is there any way for us to get a look at these stats? Because i bet i'm not the only one who really tries, but fails to believe this.
As it has the same gun as tier 7, same hull as tier 7 and worse turret as tier 8.
Did any one of the dev's play the american heavy tree till the end?

Overlord: T34 does look weaker than its counterparts especially if not maximized. However I doubt there would be any changes to it prior to the introduction of M103.

MrCaffeLatte, on 16 May 2011 - 10:07 PM, said: Are there any plans to increase the free exp:gold ratio (to, say, 50-75:1 or so)?
Are there any plans to hold events where the free exp:gold ratio is temporarily increased (say 100:1 for 3 days or something)?
I'm assuming you are not in a position to answer my previous question regarding SPGs.
And by the way, thanks for 6.4. I'm sure it will be a great patch.

Overlord: 1. No, the current rate seems to be ok.
2. Various discounts are possible especially dedicated to a particular big date or milestone.

Doctuer, on 17 May 2011 - 08:41 AM, said: It appears that the WoT dev team have elected to delete the Panther II's 105mm gun from the upcoming E-50 when it replaces the Panther II in that tier. Taking it's place will be the L100 "extra long" 88mm gun. Why have you elected to not give the E-50 a gun of signifigant alpha strike capability ? It's about the only thing (other than speed which is also not going to be the E-50's forte like it is with the Panther II) about the only thing making the Panther II competitive, and to be competitive with the T-54 you need both alpha strike (post penetration) and speed. The E-50 is much slower then the current Panther II, so far the rumored performance makes it even slower then the soon to be tier 7 Panther!
Now we will have a better armoured medium that is both slower and comes with a signifigant alpha strike reduction at tier 9 in the German medium line. This is worse overall than what we had already.
Why can the E-50 at tier 9 not have the 105mm gun, hell I'm not looking forward to being SLOWER than before with less hitting power then before ?
I would have thought it would have the 105mm as top upgrade, with the 88L100 as the middle upgrade, and the 75L100 as the "standard gun" since the 88L71 is a tier SEVEN gun and a bit of a slap in the face on a teir 9 medium competing with T-54s which exceed it in speed, armour and BOTH available guns, when compared to the 88L71.
I really want to keep giving you gold money but it's getting harder to do so in light of some of the choices I have to accept.

Overlord: It is possible that 105mm will be available, wait until the finalized module setups are announced.

Overlord: No, these tanks are extremely profitable in terms of credits. 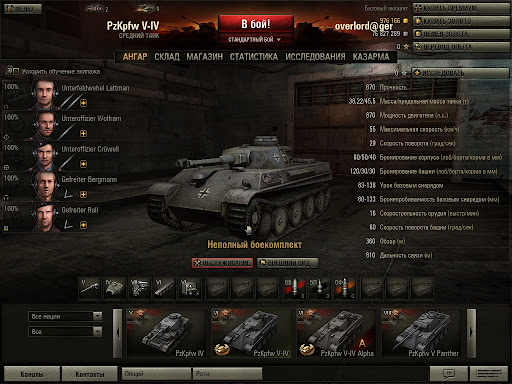 what are this stars at ure tanks?
Mfg DP

Overlord: what are this stars at ure tanks?
Mfg DP
These are double experience markings which show that it has not been recieved yet.

Kathapalt, on 17 May 2011 - 11:50 AM, said: Thanks for the reply but Could you clarify a bit, Is the credit gain same as T8 pre order M6A2E1 premium tank or bigger?
If its bigger i could re-consider of bying it.
Thanks again.

Overlord: Should be higher for Lowe and KV-5, as far as i rememeber.

Fimp3n, on 17 May 2011 - 05:44 PM, said: So those of us that bought the heavy pre-order package to get a unique tank won't have a unique tank anymore? No thanks.
Overlord, are there any plans of adding a premium US tier 8 heavy tank, that is not the pre-order M6, for those who started playing the game after launch?

Overlord: 1. Don't get it actually. M6A2E1 won't be available for purchase from Store.
2. I don't have the exact figures at the moment, but both KV-5 and Lowe appear to be overprofitable (already saw 130+ credits income on KV-5).

Overlord: Will see. The whole game economy needs to be readjusted.

Overlord: Yes, thanks for brining it up. "Ears" are still a part of the hitbox. We will consider reworking them into "skirt" / "shield" type of the armor.