Comments as ANYONE can see on the official wg forum post. Not to mention the ones made  players

IF we say new interface or free sixth sense is nice, but we write 2-5x more  about the bad things Then it do Not mean we think about Crew 2 as a positive + thing...  U cant talk yourself out of this WG. There is 1-3 good thing in crew 2,0 but 10+ thing or more what is completly wrong, broken, unnecessary, hated and so on.
Well like always i think its pointless to write this down anyway because Wg either not read it, dont care, never tell it to dev's or the higher ups dont even give a .... about us. But at least we can see how we, other players think about wg. 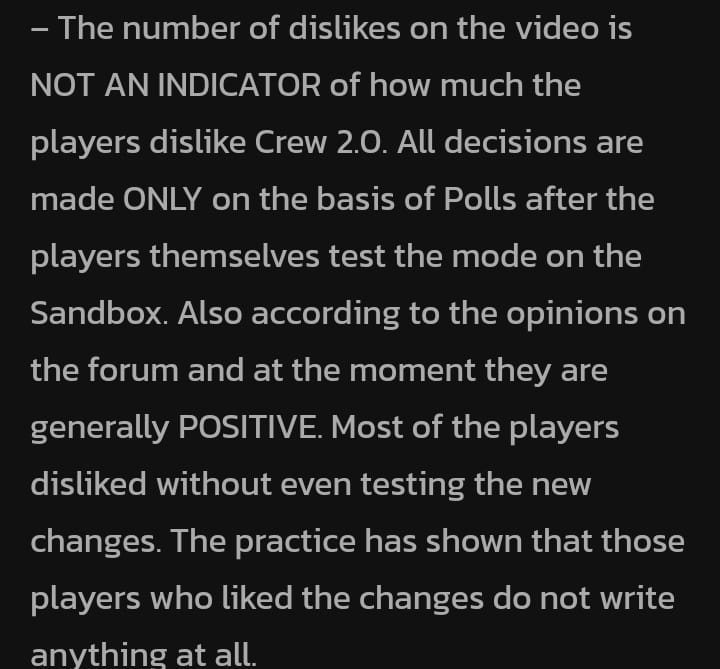 HeatResistantBFG:  So this was posted by a RU blog, and is said to be from a QnA with some dev staff and supertesters, Dwigt posted an updated/official reply to it HERE if you want more context

TLDR to that bit, he is talking about the CIS forums, no we don't only use polls and yes often people who are positive don't leave feedback, that's human nature and applies everywhere, and yes a lot of people who dislike aspects/the whole thing have never even played it. On the last one, that doesn't mean their feedback is ignored, myself and dwigt (for en and the CCs) go through all your feedback regardless of whether you have played it or not and we provide it up the chain. Also, we do not count someone saying 1 nice 4 bad as positive as you are making out, such a comment could be negative or mixed, depending on the contents.  I like this, hate 4 things = negative I LOVE this thing, I'm not a big fan of these 4 things but meh = mixed

Obviously, this isn't an exact scoring system, we use common sense and personal judgement but it's honestly pretty irrelevant to the feedback we gather as we will be largely reporting on the feedback itself, aka the thing you hate or like. The overall sentiment is often a much more complicated thing.
Sandbox Crew 2.0 - Second Iteration
Реклама | Adv
WoT-News.Com