Armeida, on 24 February 2021 - 02:13 PM, said: Played around with my light tanks last night and can't figure what's wrong here. Put 10 skill points into the Concealment perk, but camo doesn't increase for Vents or Food. If I put bouty vents in, the line is no longer shown in the summary and numbers don't change either. Any hints? 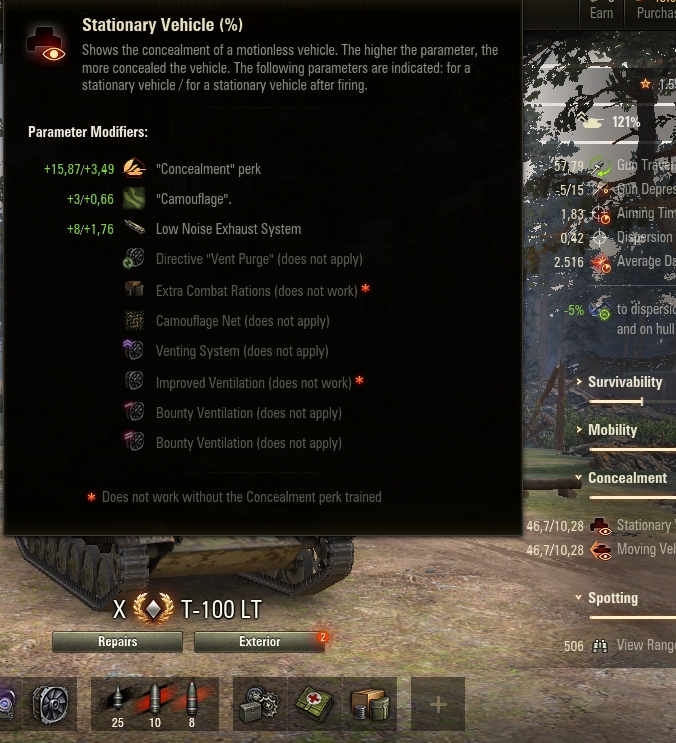 HeatResistantBFG:  We've brought it up and finding out if it's a bug.

Geno1isme, on 24 February 2021 - 02:17 PM, said: Well, that 2.0 example is however FAR beyond a 75 point crew as it has +21% from Professional Expertise, which would be equivalent to a full 9-skill crew in the current system. Which is simply impossible to get on most tanks due to the limited amount of skills on some roles. And completely unrealistic for 99.9999% of the playerbase to even get close to no matter what (we're talking literally about a hundred million crew XP there). So please don't make up fantasy examples with press accounts that have nothing to do with reality.

HeatResistantBFG:  Well, it isn't far beyond because for a start it's the same crew. I used a full crew to compare to a full crew... aka a fair comparison? So there is no fantasy, I compared at both ends and the current system has a starting leader on the new system but with more sudden payoffs rather than small incremental ones like the new system, this will change if the 10% lost though is a bug. But to make a point I went and used my own account and found a crew with 2 trained on commander (6th sense + camo) and BIA training (about 84%) and then camo trained and BIA training on the rest of the crew (again around 84%), this gave me a 24 point crew on the new. Currently, the M56 Scorpion it was on gets worse on a few stats but MUCH stronger on others... I would add though, that difference is entirely explained with the 10% gain to none commander crew members missing which if that is a bug then actually the new crew is entirely better. Also, this doesn't include the buff i would receive to stats if i had an ally within 50m's thanks to Group Tactics. Crew 1.0 vs 2.0

There are indeed specific scenario's where old is better than new, my point is that it isn't always and long run it definitely isn't. And with a few minutes of playing around on the sandbox, I even showed that at early points in the crew training the new crew can be better too.

SastusBulbas, on 24 February 2021 - 02:30 PM, said: So I spent real money and crew books on my Mirny crew, what happens to them and their XP, does it become the most expensive useless skins ever with this new system?   Multiple BIA crews bought with real money, now that free BIA skill accounts for nothing?   I have Santa's as commanders with multiple skills that I actually bought crates for due to the zero perks, what use are those now, nerfed consumables for a useless percentage on something picked for me?   My favorite crews are event and reward crews, Santa with maidens, ruined. Chuck, the Prime commanders, ruined.   Now I also have tanks with multiple crews, three skill crews non BIA that were swapped out for BIA crews, as I didnt mind having two crews trained different for different tanks as things changed over the years. It wasnt an issue with those old crews able to reside within premium tanks, but now what happens to my duplicate tank crews?   One crew for three tanks, shove that, I have 579 tanks with crews, I dont have an interest in playing a battle then swapping a crew about, hence the REAL MONEY spent buying crews with gold, the REAL MONEY buying event crews, and the REAL MONEY buying BIA equiped tanks for BIA crews.   I didnt do Battle Pass and 7v7 for commanders to get shoved in the dung heap.   So basically, why are Wargaming screwing most of us over with an appaling idiotic patch that simply says the player base can go to hell thanks for wasting your time and money piss now if you dont like it?   Cant you simply refund us all the money we spent on gold and training?   Seems that its a direct nerf to crews and premium tank not an improvement, most of us who went the multiple tanks and kept old crews are losing what we paid for, and in return getting worse crews that wil now take even longer to level up. I havent even recovered or re-equiped from equipment 2.0 and the pathetic handling of that.

HeatResistantBFG:  Any experience added to crews is kept, so you lose nothing from the gold spent. The 0 point perk is indeed "lost" but the crew member now becomes an instructor capable of buffing your skills.

You lose nothing, all the xp you earnt is kept and you gain instructors which buff your crew much like a 0 point perk did.
Sandbox 2021: Try Out Crew 2.0!
Реклама | Adv
WoT-News.Com